As I’m sure is true for anyone in my class, I don’t like openly collaborating on my own ideas,  but I do like talking about others’. I think theres a reluctancy to put forward your own ideas simply for the fear of others shutting them down. However, what’s great about a collaborative brainstorming session is that instead of putting forward a large selection of your own haphazard, messy and self conscious ideas that are usually quite similar in their direction, you are able to start with a blank canvas with a group that might be able to see the problem through a unique lens. Collaborative brainstorm isn’t as daunting as presenting a range of ideas to a group, because you are given the opportunity to bounce ideas off each other, be inspired by each other and start flows of conversation and creativity that might be incredibly useful in the idea generation process.

Our group brainstorming session during class was incredibly useful, and I found it far more valuable than the brainstorming I had attempted just the day before that class that was tedious and resulted in me forming a page of similar ideas, most of which were merely ‘filler’ proposals that were used to make the page look nice. It took a while to get the ball rolling, (our first brainstorm not as quick and smooth as the next few), but eventually we were starting to get creative with our ideas. Initially we were trying to split our possible design outcomes into the three categories of Service Design, Generative Design and Data Visualisation and work on each Emergent Practice Area on it’s own. It didn’t take long for us to realise that it was better for our creative thinking to not worry about categorising our ideas and focus on churning them out, disregarding how easy they would be to create, how useful they might be and how we might visualise them. What we needed to do was focus on the problem statement and think about creative ways of combatting that issue. Allowing the freedom of thought meant that each time we delved into conversation about a proposed idea, our words helped us segue onto the next one. 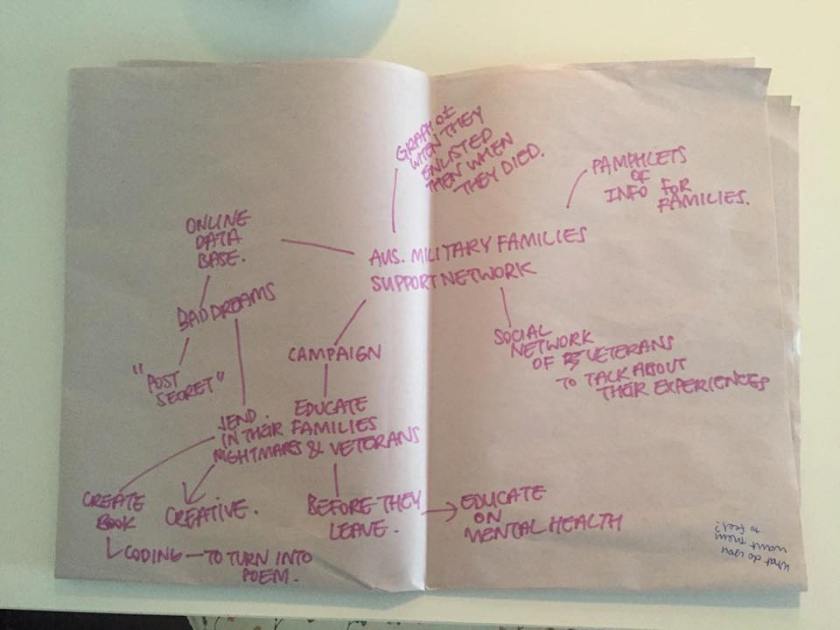 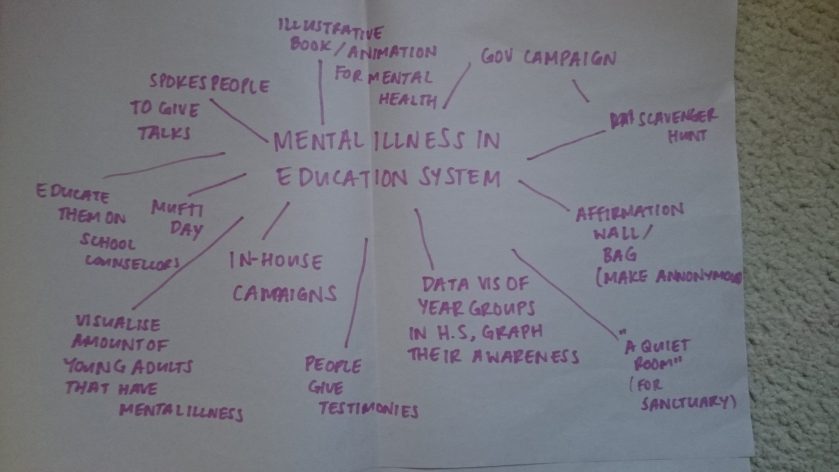 These two images are from Brainstorms that were not my own topic, but were from individuals in my group. I found that even listening to the ideas of others and coming up with possible solutions for topics that were not my own, I was able to be inspired and spark trains of thought in my own mind that might be useful for my own area of research. In the first map pictured above, one of my group members mentioned the world renowned unique mental health initiative Post Secret, in which individuals mail anonymous postcards with secrets or burdens that are playing on their mind and have them published online and in published books. Post Secret has been a movement I have been following for many years and it caused me to think about how this might be a source of inspiration in regard to own problem statement. 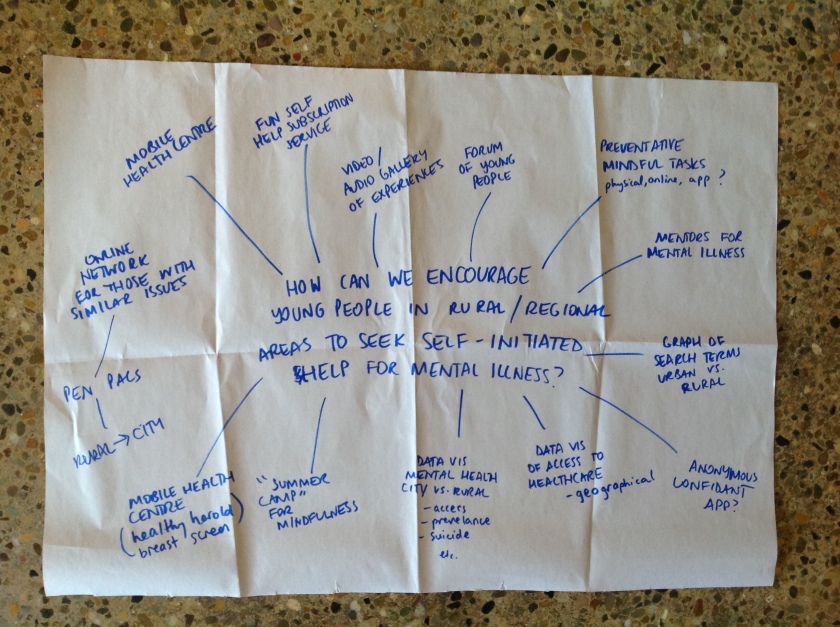 I am very grateful for the ideas generated by my group in regard to my own research area of choice. Not only was it incredibly useful to have other creatives come up with ideas that I alone might never have visited in my own brainstorming process, It was also incredibly beneficial to have the presence of others during the process. The pressure of having to voice ideas out loud and make comments during conversation forced myself to think about my words, my ideas and what they really mean. Collaboration is just as much a performance as it is a research method, and the nerves I get from having to work in groups can sometimes be more useful then it is a hinderance.