During this week’s tutorial, we were prompted to begin focusing and brainstorming possibilities on formulating a designed response to our issue. In the focus of my issue, I considered all the stakeholder maps, previous brainstorming sessions, and the primary and secondary research I conducted on the law enforcement and mental health throughout the semester. In my last two blog posts, I had already begun considering possible design responses, ranging from creating several information visualisations based on user engagement and activity on the issue, to an interactive visualisation of key stakeholders that aims to educate others on the larger issue in my focus. However, this class gave me the opportunity to effectively delve into this problem, and explore with my peers on many possible design responses.

At first were given the task to define a problem statement by answering simple questions to guide us in the next stage of the lesson. It was a true test to which parts of my research throughout the semester really stood out to me and how these would direct my attention to the actual root of the problem. It was quite difficult to say the least because, as evident in my blog posts, my issue is intricately complex. It is riddled with many factors, stakeholders and histories that could be possibly carried into a year-long (or perhaps even longer) research expedition where you could finally acquire a truly objective and educated perspective as well as a possible solution to the problem. It doesn’t help that my issue is largely located in the United States, a culture that I don’t even live and breathe in but I’m only constantly influenced by from afar. Nevertheless, I was able to write the following for the questions. I tried to keep them succinct and straight to the point of what I really cared about and wanted to explore further.

When does the problem occur?
The problem occurs whenever someone who is deemed innocent by the public, is fatally shot by police. This occurs especially in conjunction with the Black Lives Matter movement and mentally ill people. Sensationalist media articles and reports are then released, leading to quick judgements and assumptions reigning the comments.

Where does the problem occur?
At this moment, the problem specifically occurs in the United States in correlation to their Black Lives Matter movement and the controversial gun law debate.

Why is this important?
Innocent people cannot keep dying for no reason, especially by a person who is supposed to be protecting the people. People need to be aware that there are ingrained cultural beliefs and attitudes in society that we were grown up to thinking that these things are okay. Assumptions and stereotyping is rampant, and they work subtly in influencing people’s decisions whether they are aware of it or not. This is one of the many possible reasons why African American people and mentally ill people are shot – ingrained attitudes from a wealth of media and society paint negative associations towards these minorities. Recognising these attitudes and perspectives with proper education and training may better improve police’s role in society and how they handle encounters with mentally ill people. Making the public more empathetic and understanding the complexities of the issue will allow more informed and objective perspectives that will spread towards wider society. It can create a much safer environment for the mentally ill, and improve how we perceive the law enforcement. It will also help in focusing on the wider actors participating in the issue, prompting them to push for change on smaller things before larger and more effective changes can happen.

From this with my peers, we then were prompted to brainstorm possible design responses based on our statements using three practice types of design that we could produce something out of – service design, information visualisation and generative design. Due to the lateness of when we were prompted to begin the task, my peers and I were only able to brainstorm ideas for ‘service design’ together, leaving myself to brainstorm the others myself at home. As I’ve stated in previous blog posts, brainstorming ideas in a collaborative setting is quite insightful and fun to do. You’re able to bounce ideas off one another easily and take away differing perspectives that you may have not thought of yourself. It opens new ways of seeing the problem, especially when you have each peer focusing on another part of the issue. They are able to consider other possible stakeholders and provide additional contexts to consider in the problem. Despite the short time that I’ve spent with my peers in this exercise, I was still able to generate ideas for my peers as they did for me. 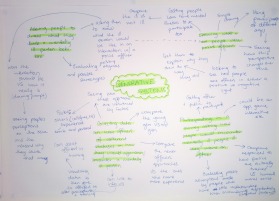 The following five points are some of the potential design possibilities I identified in this brainstorming session, with and without my peers.

From these, below is a proposal of one that I am leaning more towards to in developing my direction for this subject.

In the rising issue of the excessive use of force by police and their many cases of fatally shooting mentally ill persons being reported on almost daily, the public perceptions of this authoritative role in society has been met with chaos. Doubts, anger and demand for justice against those who deal out the justice have emerged, instigating many debates on public online forums and comment sections. Despite all of this however, is this truly how people view the law enforcement?

Thus, I propose a design response using a collaboration between generative systems and information visualisation, where I would invite others to draw a simple drawing of how they view this person in blue. Afterwards, they’ll be prompted to provide a reason onto why they drew that way. The activity invites people of all ages, especially with those who have a mental illness, to participate in the exercise. In order to identify them, a simple age, gender, race and if they have a mental illness will be filled out beforehand. The exercise would consist of simple paper and pencils – coloured and lead – making it easy for the participants to understand what to do. Participants are also encouraged to be as open with their interpretation of the activity as they like. The works would then be collated and organised on a site, where users can then sort the drawings  by the participant’s gender, age, race and existence of mental illness. There is also an option to organise the drawings on a positive and negative spectrum to allow users to evaluate the wide variety of perspectives.

Through this design response, I hope to elicit the varying perspectives between the ideas of authority and protection. In visualising the data and analysing people’s reasons for drawing the way that they did, we can identify certain factors and trends that influence people’s perceptions of the police; especially of those who have mental illness. People would be able to share their own personal experiences with the police, generating empathy towards all those involved dependent on the situation. Identifying these factors can then prompt for changes in attitudes and behaviour towards the police as well as changes within the law enforcement’s system.