In order to gain further insight into the issue of Mental Health and fully understand its complete vastness, issue mapping with group members was not only essential but also extremely effective. By dissecting the issue of Mental Health on a controversial basis, we were able to decipher past, present and potential future matters and how we may assist and even solve such matters.

By initially centralising our individual maps to certain human or non-human actors we were able to develop certain scenarios that may eventuate in relation to Mental Health. Influences of change, for example, became the centre point of my individual map with such ‘influences’ including celebrities, people, society, culture, digital media, print media and social media. These influences or driving forces of change proved paramount when then developing our issues maps as a group.

Such controversies were discussed in relation to each individual group members focal point within the issue of Mental Health. This proved extremely insightful and compelling as certain controversies were brought forward that others, including myself, had not yet recognised or acknowledged. It is interesting to understand what is important to others and what is disregarded or thought as less controversial.

Through analysing and generating further discussion it is apparent that Mental Health is very important and of high substance to all of us in unique ways. These mapping processes therefore prove to further inform our future decisions and potential solutions as we are able to gain such intrinsic feedback and develop meaningful, powerful conversation. 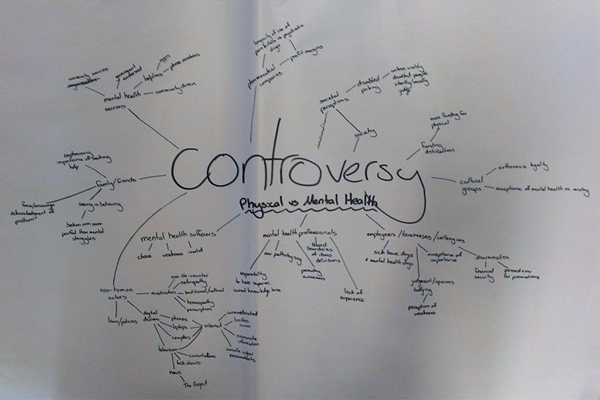 By collaborating our individually formed maps based on singular actors, both human and non-human, our ideas on mental health, with its naturally multi-faceted nature, were able to be transcended. With each member offering a unique idea, opinion and view point in regards to particular niche topics within the broader cloud of Mental Health, the mapping exercise empowered us with a triumphant sense of knowledge on the issue, with new, deeper, richer meaning.