Co-creating a map on the issue of housing affordable allowed a range of different ideas to emerge. Due to the short turn-around of this research project everyone has taken their own directions, and, as such, has niche areas of knowledge. Co-creating the map allowed them to share what they knew and had found out. Our stakeholder map hasn’t changed too significantly from the early weeks – rather we have started to overlap shared values and begin to understand how the system works, not just individuals within the system. 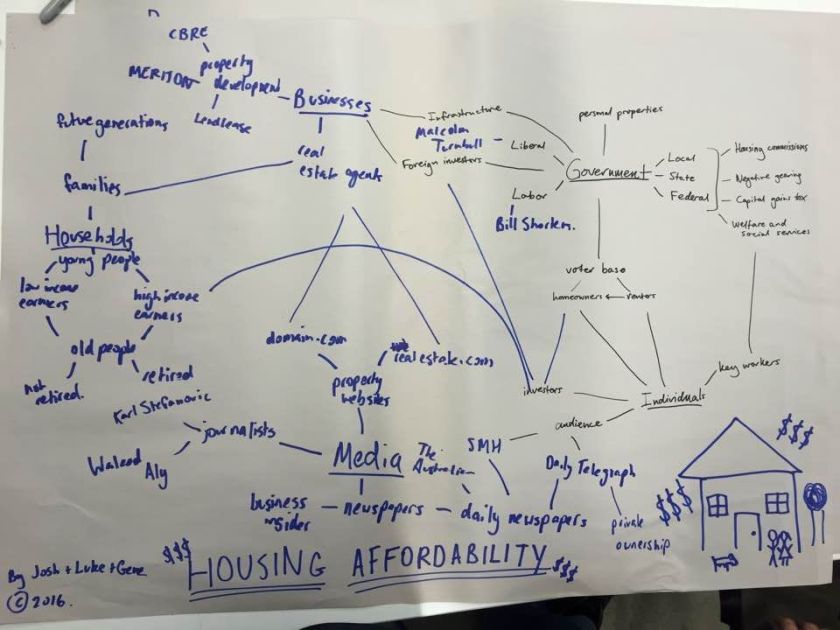 Housing affordability, unlike some other issues students are exploring, is an issue with two direct sides. Changes to policy and tax schemes have winners and losers. Thus, a question we talked about while mapping is why the current status quo of negative gearing exists and looks likely to continue to exist, despite the negative effects on lower income earners from the general youth to disabled key workers. We identified that the government (particularly the Liberal government) supports the current housing system for both personal and political reasons. Personally, they hold stake in properties and this is a system that works for them. As much as we hope our politicians are altruistic and impartial to personal stake in lawmaking, in reality they are not. More importantly though, the current government relies on appeasing homeowners as they are seen as a larger voter base than non-home owners. Further, homeowners are more likely to be politically active and advocate their needs will increase chance of re-election. The group then explored how the media supports the current system for similar personal and political reasons. Media also plays a powerful role in perception of the issue, with certain high-profile projects being used to fuel opposition to affordable housing that, without any media support, would likely come off as elitism.