For this task, I have chosen to scrape data from Twitter. Twitter is known as a microblogging social media site, in which users have profiles from which they can send Tweets, i.e. messages of no more than 140 characters. Users can include links, images, and videos in their tweets. On each user’s home page is a ‘timeline’, i.e. a feed comprised of tweets from users they ‘follow’. Users can interact with others by adding others’ tweets to their favourites, ‘retweeting’ (broadcasting that tweet from their own account), and replying to tweets. Users can also directly tweet to other users by including the recpient’s username in the tweet.

The unique qualities of Twitter are those proffered by its ease of access and strict character limit. It is very, very easy and quick to send a Tweet, and so Twitter is a perfect tool for live, ‘in-the-moment’ updates on a particular event, situation, or state of mind. Its character limit also tends to force brevity; messages are condensed, increasing immediacy often at the expense of nuance and complexity. This latter quality leads to the highly polarised nature of many dialogues on Twitter.

The process I used to scrape Twitter for data comprised of using the advanced search function to find tweets in which people used the exact phrase “my mental health.” I used this phrase because I was curious about people’s personal perspectives on their own mental health. 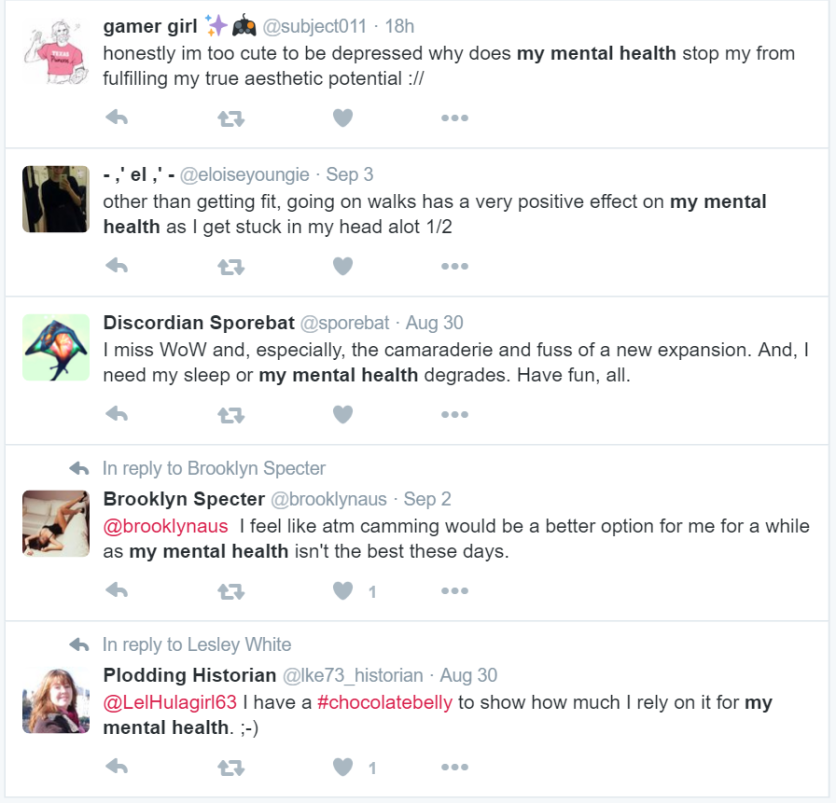 I first limited my search results to those near Sydney, New South Wales, then exapnded it to include tweets from all over Australia, then eventually all over the world (so long as Tweets were in English) when it turned out that the former was a little limiting.

Below is a five-point summary of my findings:

I imagine that I could use this type of data to create a visual design response in the form of a chart or graph that visualises the various types of tweets about mental health, separated into various categories e.g. talking about their current bad mental health, talking about their mental health being good/improving, tweets with humour, tweets without. It would be interesting to map the correlations between various qualities. Mapping age and location might also reveal interesting insights.

In this task, I focussed on the phrase “my mental health”, which revealed very personal tweets. I imagine it would also be interesting to generate a visual design response comparing personal and impersonal data on the topic and comparing the difference in tone/content in each.