Scraping the web for data allows one to gain an insight into what a broad, but generalised swathe of what the online community thinks. This was particularly relevant in my interest with Refugee and Asylum Seeker issues as I find the differing perspectives and opinions very insightful.

With the Advanced Search on Twitter, I started quite broadly. I used simple hashtags and key terms such as ‘refugee’, ‘asylum’ and ‘migrant’ to try and gauge the general, majority opinion that Twitter users were broadcasting, both in Australia and overseas. Along with this, by doing the Twitter scrape via Google documents, I was able to further filter these keywords and build upon my initial findings.

The majority of tweets which were picked up revolved around Australia’s treatment of refugees since the issue of detention centres and border control systems are so highly criticised in recent times, as well as these issues being prominent in the media. In addition to this, Australia was contrasted with other countries in regard to discussing how these countries approach the issue of refugees, with users highlighting the differences in policy between these nations.

The five key points that I took from this exercise were:

Below are a few screenshots of my process: 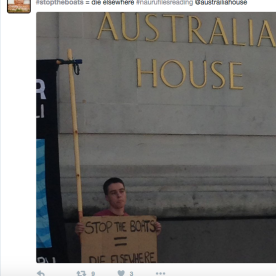