Twitter is a web based platform sporting a variety of forms and functions. When uploading, updating and sharing tweets users are able to import photographs, links, videos and share these via other media platforms. Viewers may upload posts as tweets, whilst also selecting, liking and ‘re-tweeting’ posts shared by personas and pages audiences follow. Through a selected language, waves of viral topics and discussions circulate the platform of which are categorised in twitters advanced search that highlights specified words, phrases, hashtags, languages, accounts, locations, times, dates and emotions. Material may be further categorised into top tweets and live tweets.

Users and Identity of Community

The community of users on the advanced twitter search are diverse and endless. Users may vary from individual personas or the general public, organisations, government groups, personas of authority, non-governmental organisations, demographics, diverse in gender, political, social, religious and so on.

I have categorised the users into two refined groups, individual and numerous. Individual users are those with one voice and one operation or navigation through the site. Often they may represent one viewpoint or work through and navigate one pathway. Individual users have specified unique and skewered viewpoints based on opinion and may represent a bias of data. Individual users navigate a variety of thoughts on environment, religion, politics, comedy or pop culture. These may be one or more issues and topics, whilst some are in more in depth others may simply scratch the surface. Numerous users are representations of groups. They may have two or more operators that work on the site and create the accounts image or identity based around an aim or target goal (i.e. to spread awareness, entertainment or mass media). Numerous users often work with specified issues and tasks at hand, and attempt to communicate to the wider public. Supporters of these voices are from other individuals and numerical groups.

When looking into users that are related to climate change, conservation, coral bleaching and sustainability numerical groups and organisations dominate these pathways. Organisations identified specifically for these topics present most of the data, tweets, posts and sharing. 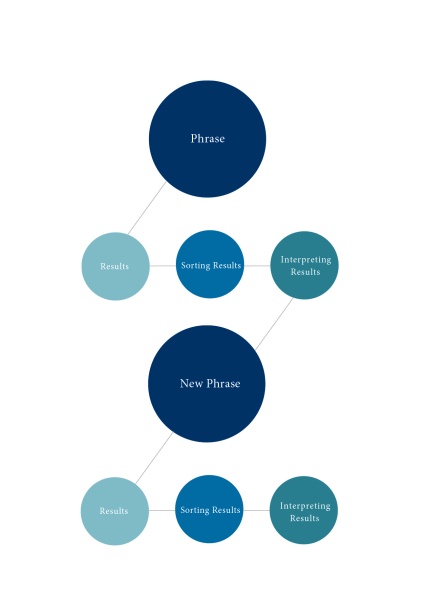 User Study: Who Talks about the issue? 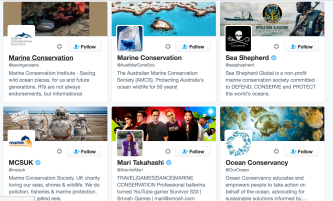 Using the twitter advanced search I was able to see in clear view sources, organisations, research and posts in the distinct areas of which I was searching, that being ‘coral bleaching’. The groups were represented as generally positive, conservation groups hosting meetings, influential people doing influential work. It was rather interesting to note the photograph search. Here a repetition of colours and marine photography is shown. This brought me to think about how I could produce visually engaging data that communicates the destruction that is coral bleaching in an interesting way so as to stand out from the photography and generalised media related to the task.

This user study began very broad, a simple representation of any topic that is stimulated by the phrase ‘climate change’. Essentially the issue is rather broad and interaction with this issue is apparent.

The demographics of users who are thinking of the issue of climate change range from Europe (Italy, UK), Australia, USA (Texas, Colorado, New York, Seattle or Washington) and South Africa. A majority of users from this short study reside in the USA.

The next search rule summarised all users in relation to ‘Marine Conservation’, whilst users are followed and posts are seen, it is interesting to note the decrease in sharing by retweeting on a number of tweets, such as the relation to increasing marine protected areas or marine conservation education.

People interacting with marine conservation here  are again generally ranging. Re-appearing locations in the USA show some consistency in activity with climate change and marine conservation on a deeper level. Some new appearances can be noted in Canada, Ghana and Germany. Again, referencing international understanding.

When studying users of sustainability data showed an increase in interactivity with followers of posts, slowly showing more re-tweeting and engagement in the issue. Much of the retweeting occurred in response to an actions. The term sustainability is very broad, results referencing ‘digital privacy’ or building can be seen in the imagery, skewing the data. In the future phrases in reference to sustainability will need to be more explicit, like ‘sustainable energy’ or ‘marine sustainability’.

Here I didn’t look that far into the location of the users seeing as the first automated system  results showed skewed or irrelevant data. Although, understanding the term sustainability was well known.

Finally, I progressed into a more explicit search, looking at coral bleaching. It is evidently a more controversial issue sparking the more retweets of all of the phrase studies. Twitter posts ranged from the ‘worst coral bleaching events’ or ‘coral bleaching caught on film’ again referencing controversies that spark the interest of the audience. However when moving deeper into the date of posts, the amount of posts and conversations about the issue was significantly less than the other phrases searched.

Australia became significantly repetitive in this twitter archive, particularly to note the location of bleaching in Queensland and the amount of users discussing or sharing the issue. Again users in the USA, UK and Europe were also present during this search.

• Moving forward I will be collecting data from Australia explicitly. This study proved a general understanding of the issue, however I will be looking at more locally and nationally based demographics and particularly based around coral bleaching, ocean acidification, raising temperatures and the effect of these on the biodiversities of selected regions.

• Shows understanding through a variety of demographics and activity hand in hand with the key words. Internationally or globally the words aren’t all understood. How can these all be linked together? or how can a study of one location such as the great barrier reef become relevant to a wider and more international audience?

• Looking closer at data surrounding dates may be beneficial to provide more research into the urgency of the issue, thinking about ways to communicate the extent of coral bleaching.

• Finally, I may search stakeholders and interpret data from the phrases in a connection to the specified stakeholders.