During class in Week 3, we were given the task to interview one of our peers about our specific issues. And so the following week, I conducted my interview about mental health. The following outlines the ideas spoken by the interviewees; Michael, Sarah and David**.

Mental health is a disease, something that is equally as painful and difficult as a physical disease. Despite a growing number of people suffering from mental illness’ it doesn’t seem to be an issue that is discussed more openly. All three feel strongly little is being done to help those and their families.

All three people knew of at least one or two people experiencing mental health issues, depression and anxiety being the most common. However, Sarah thought there would be more that she did not know of as she understands that this is a personal issue that some people have difficulty talking about. As the topic is delicate and sensitive, they felt that unless a friend or family member confided in them first they would not bring it up. Michael stated that perhaps another reason for the absence of discussion between his friends could be influenced by his Korean background. Most Korean people do not speak of mental illness as it is still not understood and thus not seen as ‘real’.

All three interviewees are aware of the difficulties of dealing with mental health issues by themselves, and so it anyone were to come to them for support they would listen and help find ways to manage their illness. Advice would be given however without the proper education this would be limiting and so professional help would be suggested. Understanding the seriousness of mental illness and the courage it takes to confide in someone, all three interviewees would not turn them away. When it came to confiding their own mental health issues with others, each person hesitated. David stated he would keep it to himself and only seek help when it reached a point where it was too difficult for him to handle by himself. He was not sure why this was the case however believed it may be because he himself would not know accurately whether he was experiencing a mental illness. David found that speaking to a counsellor or psychologist would be easier as they would not have any standard for him or his background. Sarah and Michael replied that they would confide in only their closest of friends or family members rather than professionals at first due to the personal nature of the problem, however would not hesitate to seek professional help with the support of those friends or family.

The internet was the first source of information to find out about mental health. Whether it was just for knowledge or for self-diagnosis, the internet is easiest to use and although not being the most accurate, it comes with a sense of anonymity and security. The interviewees were not aware of the mental health services that are available in the community, or did know but did not know how to access them. On the other hand, most knew of mental health movements through social media such as ‘R U Okay’ and the 22 Push Up Challenge.

When it comes to stress, Sarah and Michael admit they doesn’t work well under it. They aren’t able to concentrate or focus which limits their productivity and creates frustration. David stated that he enjoyed working under some stress as it helped him to work harder and faster. However there is a threshold and when it passes this point, productivity decreases and procrastination kicks in. Ways in dealing with stress included taking a break and talking with friends, having a snack or cup of coffee or the most popular, taking a quick nap.

With the interviews being complete, each person was told about the theory of creativity and mental health. It was interesting to note that Sarah had no knowledge that the two were interrelated. David and Michael had some vague understanding that the two could be related from their knowledge of famous artists and writers.

The interviewees were asked to draw an image at the end of each day that represented how they felt the overall day went. They would be limited to drawing with only circles, however colour and size were her choice. Under the image, they would write one sentence describing the image.

The following drawing are the results of the probe. 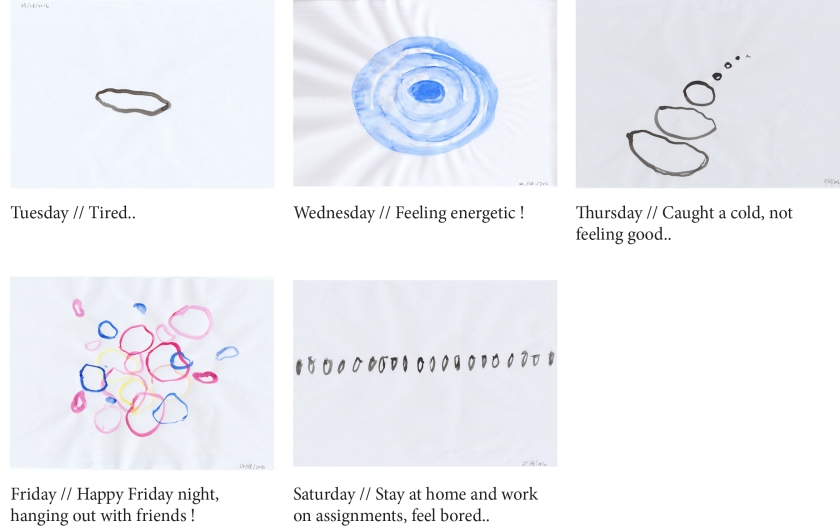 Despite not knowing about the correlation between creativity and mental health, it was interesting to see that Sarah had chosen to use colour and greater detail on the days that she was feeling positive.

David stuck to the notion of circles, using a greater number of circles and space on days with higher emotion.

Despite not being in the creative field, Michael has chosen to express days of high emotion with detail and creativity.

Working as a group of images, I feel like the probe was a failure as each person had interpreted the task in different ways. It was also hard to measure the scale of creativity for each image as there is no definite answer; something that previous studies have documented in their scholarly articles.

Alterations of the Probe

Although I thought the probe was quite simple and controlled, having asked multiple people to under take the same probe, the task was interpreted differently. I also realized that some people had taken a literal approach to their drawings, trying to depict an activity or event that happened during the day rather than their feelings.

If I were to do this probe again, I would set different parameters; limiting participants to one circle and drawing around it to express their emotions. I would also ask participants to rate how they felt on the day on a scale of 1-10 (1 being bad and 10 being happy). This along with their explanation would help to moderate the results in a group.

The process of interviewing was a vital part of my research as it helped me to gain insight into how other people view mental health. Having a simple discussion with others and talking about the issue, reminded me of exactly why I had chosen to research mental health. Support. Support plays such a big factor in treating mental health and definitely changes the experience of those suffering from it. Many friends and family members have found it difficult to support close ones with mental health issues and have stated that there are not many resources for them to learn from. On the other hand, many people with mental health issues believe that those who do not suffer would not be able to understand their ordeal which prevents them from speaking about their problems. I believe a strong support network would help combat this issue as friends and family would be trained and educated to empathize. Support is vital to help ease the negative experiences of mental illnesses.

**Names have been changed