In our groups in week two, we mapped the participants and stakeholders (human and non-human) that were involved with our issue of gender equality. This allowed us to see that a lot of the stakeholders were connected, whether it be a direct connection or indirect. The actors shared a lot of the same values and this exercise allowed us to see this. This map showed us that community groups were linked to all our stakeholders and shared some of the same values but also had opposing ones. Education also appeared important as this is where schools can ingrain a positive image of women from an early age and of course social media plays an important role in promoting a positive image of women. We also discussed how men where either fully aware of this issue and didn’t care or just did;t know it was happening.

This image was part of a campaign started by the Duke University students in North Carolina depicting why each individual needs feminism. They aimed to challenge existing stereotypes of feminism to decrease the negative connotations the word has in todays society. I chose this image because I might have thought this guy was attractive… but also I was very impressed to see guys involved in this campaign. It was so empowering to see that this campaign does not discriminate against gender, race etc and recognises that feminism is an issue that affects EVERYONE, not just women. 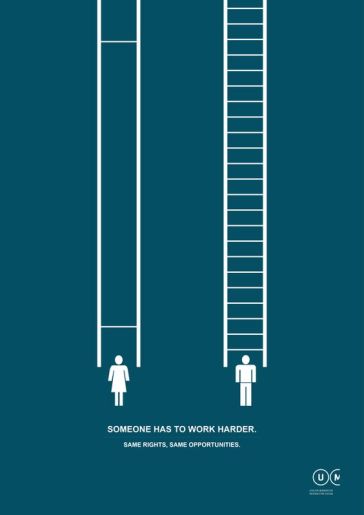 This image intrigued me because it used the word ‘someone’ rather than women, demonstrating the layers of complexity this issue has. It becomes obvious that the figure on the left is wearing a dress and therefore represents the female population. I like how simply this graphic is and how it is east to understand and how it can also be understood universally.

This image really spoke to me as I think this is the core reason behind the gender equality issue. Certain members of society such as men, don’t think the problem affects them personally because they are not female. This therefore hints at the fact that in some cases men have more privilege than women do, like in the workplace. If in my design proposal later this semester could somehow demonstrate how this issue is also related to men not just women it could be a very successful proposal.

This image reminds me of the Gestalt figure and ground images we looks at in first year! This image is a clear representation of the fact that gender equality can only be achieved when both male and female parties cooperate and care enough about the issue to want to make a change. The other more apparent message of this image is that ‘equality isn’t voluntary, it’s necessary.’ If we want society to function in a fair and just way, we need gender equality and ultimately this could lead to equality in terms of race and religion.

I connected with this image as soon as I saw it, because I feel as though it says exactly what I have been trying to say in these blog posts. Just because we want equal rights, does not at all mean we want to be treated like a man, we want men and women to be treated equally in a fair and just way.

I’ve always loved these e-cards, as I feel like they say what we are all thinking, and this one is no exception. I think this highlights the issue, in a more comical way, and blatantly says that women are still in oppressive gender roles. I do like that this e-card includes a bit of context by saying 1950s, showing just how long this issue has been around for. 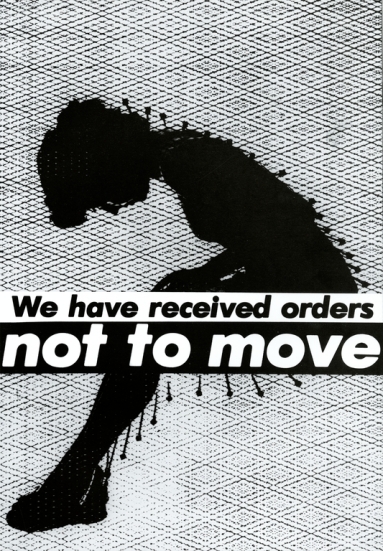 Barbara Kruger’s works explore ideas if femininity, and this is clearly evident in her work Untitled (We Have Received Orders Not To Move). Kruger’s feminist politics were now manifest in the content of her art rather than in the form. On a literal level, Untitled (We Have Received Orders Not to Move) momentarily immobilizes the viewer who takes the time to read its simple declarative statement. The ‘we’ is representative of a woman’s voice, encompasses the pinned model, the artist, and the female spectators subject to masculine control.

This image depicts the standards and opinions that society place on women. After having just recently visited Dubai, being in a country that is majority Islamic has definitely opened my eyes to their dress and what is said about it. The left side of this image depicts what the women in Dubai and of course most other Islamic women wear. It is part of their religion to dress that way and that is how they show their connection to their faith. It angers me that people have the nerve to question what they wear because it doesn’t meet societies standards of what the ‘ideal woman’ should look like. Similarly the right side shows the complete opposite of the left side and shows a nearly naked woman and how wearing too much making and clothing that may be shorter than the normal is linked to sexual connotations and that you aren’t comfortable in your own skin. Well of course so many women aren’t comfortable in their own skin, because of all these opinions and attitudes that are placed on women. I wouldn’t say I am completely comfortable in my own skin and I think that is based on what I see on social media and society’s views. 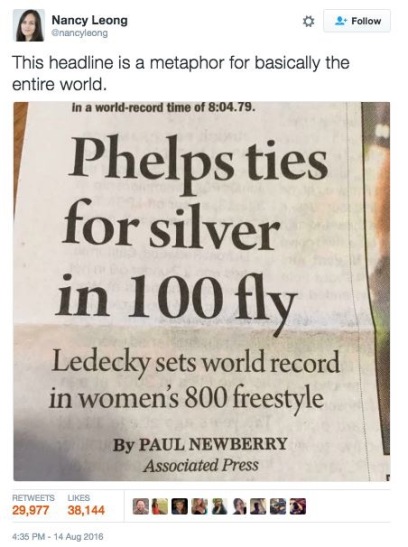 This image infuriated me. Phelps may be more well known and therefore better suited for a headline, but Ledecky has set a world record when he has come second. This should be celebrated, a world record is a huge achievement, but she has to take the back seat to Phelps. The media is a huge contributor to this issue, shaping and shifting society’s perceptions of gender.

This UN advertisement based on actual Google search results, demonstrates some of the views that are unfortunately still held in some parts of society. By covering the women’s mouths with a search bar search and results, it effectively communicates society’s attitudes and opinions of women dictate what they should and shouldn’t do. The other side of this issue is men, which isn’t clearly represented in this image. Men are one of the driving forces behind this issue but I think this image is powerful enough without clearly stating that perhaps this search results are by men.