In general, image of ‘Healthy living vs Unhealthy living’ is effective introduction of obesity on my blog post to show how two different bodies or their organs work through metaphoric graphics. This contrast appeals that healthy lived body works systemically and stimulates circulation much better than obese body.

Obesity is one of the most serious public health problems of the 21st Century. This image satirised that obesity issue is getting worse as compared with improvement of technology over times. Moreover, it pitches correlation between technologies and life style such as reduction of physical movements, depending on convenience life and also increasing media impacts on humans.

This comic satirises how media impacts on people’s perspective about obesity in general and it may deliver misinterpretations of awareness what healthy living is and obesity.

This image referenced the fact that Samoa Air started charging passengers by weight and it is the first system of its kind in the world.It issued about discrimination what is their standard of charging by weights and difference between obese and well-built people if it determined how they use distinguish over-weights to suit their criteria as like over 118kg charges more 130 pounds than ‘standard’ weights.

This image let audience recognise children obesity issue that people can not blame the parents who buy junk food but able to blame the commercials that advertise junk food. It is continuos bad linkage between advertisement and children obesity that not only is that parent preventing the child from seeing junk food advertisements, someone is making a responsible decision to prevent the child from becoming obese.

This image argued with the fact in America that tax for soft drink is the solution to help reduce the ones of obesity due to soft drinks are not the cause of obesity which is only a small percentage of the daily intake of kilo-joules comes from soft drinks. 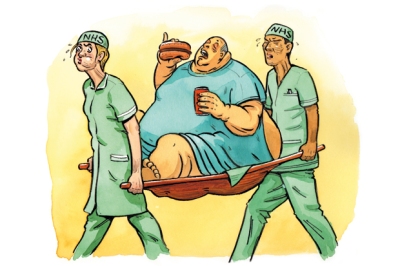 This cartoon reveals title of article, ‘Obesity is not a disease’, which points out the obese person who don’t want to go on a diet and think they are kinds of disease. It shows how obese patients impact on difficulty of hospital service and abuse of health care fees.

Flesh Chair is designed by Nanna Kiil who would like to refocus undesirable human overweight as a aesthetics impetus, combined with a pleasant appearance in bright and soft materials that leads the user to be embraced by comfortable volumes. In design field, the role of product design in experiences of obesity has not been addressed yet, but products can dictate the micro-interactions whether positive, neutral, or negative are by design. Nanna mentioned as the experience of how our bodies had to adjust to the extra weight affected our sense of the “ease” of sitting down and helped established empathy for people who are obese. 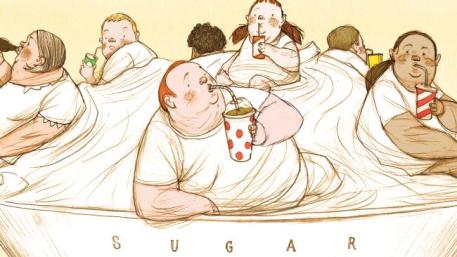 Obesity is a leading preventable cause of death n.d., viewed on 30 Aug 2016, <http://coralclub-wa.com/articles/obisety/&gt;.