This is just one of the mind maps produced by my class group. Unfortunately, I was absent that particular week, however, I am forever thankful thatI was put in a group of intelligent girls who were able to assist me with understanding what I had missed.

It is easy to forget everyone that is involved with a part. My group was quick to explain that there are many who touch and participate with the issue. It’s also important to understand the motives behind each actor and what power they have about the issue, and whether their influence can influence another actor on the topic. 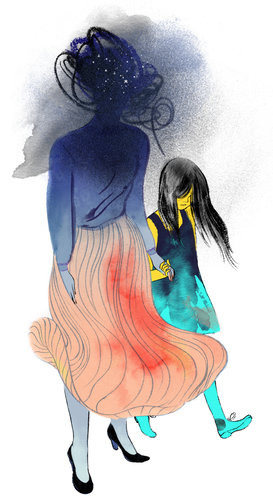 1.  This particular piece is an editorial image to accompany an article in the New York Times. The content of the article was about the relationship the author had with her daughter as she was battling chronic depression and her fear that had her daughter had inherited it because she showed signs of it as a child. This isn’t true though. What I love most about this piece is how colourful it is, and it doesn’t rely on the symbolism of colours (for example it isn’t entirely Black and White) to convey depression. IT plays with textures and it is overall quite stylistic. It doesn’t show depression to have the individual as the main salient in the image. It understands there is a relationship outside – the daughter.

2. This is also an editorial piece that was accompanying an article. This article was about Anxiety disorders, and this piece shows those who can be affected by it. This image without context does not scream out Anxiety disorder, nor does it suggest any mental illness. The idea that is conveyed is that it can “affect any age, culture or gender, but its prevalence varies depending on which region of the world you look at.” I find this striking and just like the previous image it doesn’t overuse the dark and cool tone colour palettes, or the visual metaphors.

3. This image is a comic, and though comics are not always seen as a visual style with the same integrity as an editorial piece or classical artwork this one is relatable. It is something that is appropriate for our era, in which mental health is only ever brought up because it is too risky to speak about it in a serious manner. It is minimalistic and its message is just as so. 4. This is an example that uses a lot of the visual metaphors but in a more tasteful manner. The photograph is black and white with a warm undertone that is contrasted against the many blue toned works. Mental health is described as an invisible disease, therefore many visuals try and communicate the feeling and sensations that can’t be seen. Depression is described as a feeling  of drowning. This photographer and model have recreated this but captured it as a sensation that you feel trapped in.

5. This is one image from a series that Edward Honaker did after he was diagnosed with depression and anxiety. The series is black and white, as many of this theme are. This photograph plays with white space, usually in the context of design it is breathing area and it is peaceful. However, how Honaker frames it, it is isolating and it is an abyss.

6. Beckey Netley is another photographer that decided to reach out to her camera and photoshop while she was going through her mental illness battle. Her images are surreal but unlike the common trend of black and white photography, they are colourful and almost whimsical. This piece is titled paper thin, and she expressed how she felt fragile and weak during her battle.

7. The photographer known online as Beethy had suffered from severe anxiety in 2009. He describes the sensation as being overwhelming and it was so bad that he had gotten suicidal. However, the photographer understands that it is something he has to live with for the rest of his life. He used a model to help capture how he felt. It is destructive, it shows vulnerability and its in colour. It shows mental health as more destructive than in previous images. 8. This is an illustrated poster about child depression which is something that isn’t often talked about. It depicts it as a layered and complicated sensation. It is colourful, and relies heavier on textures. However, the child within this image isn’t distorted in any way. 9. This is a simple illustration that is similar to Gemma Correll’s illustration, it relies on visualising the relationship between depression and the victim. The depression is personified and is shown as darkness which is starkly contrasted against the main person in the image. The relationship is subtle, depression is consuming but isn’t seen as chaotic as depicted in Beethy’s photograph.

10. This is a similar to the other images, it is a photo manipulation. His images are described as being an educational resource for those who may not understand what people with depression often encounter. He used his photography as a therapy for battling his depression like many of our photographers. The images aren’t all black and white in his series, they use visual metaphors to describe emotions.